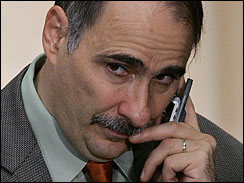 If there’s one thing (besides Rev. Wright) working against Barack Obama, it’s got to be his campaign’s ‘chief strategist’ and inescapable talking head, David Axelrod.

I can’t decide whether I hate his cheesy mustache or his Groucho Marx eyebrows more, or maybe it’ just his general resemblance to a badly shaved pug. He looks like a demonic muppet and spouts platitudes and half-truths like a fountain of pure bullshit.

After seeing 3 Axelrod appearances in as many days I’m sick of him and getting to the point where the association of his slick spinmongering with Obama is making me have more and different kinds of doubts about Obama. I thought Obama was a naive, earnest but well meaning socialist. Axelrod makes me think Obama is just as sinister as Clinton.