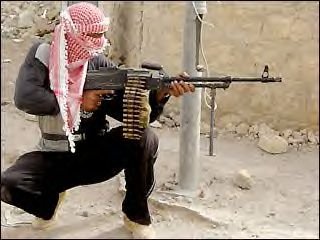 On Wednesday information leaked from the office of Iraqi Prime Minister Nouri al-Maliki that the Iraqi government was considering offering amnesty to terrorist groups who were willing to lay down their arms and cease hostilities. The reports were quickly repudiated in a statement issued later in the day, and Adnan Ali al-Kadhimi who had been the source of the leak was fired from the Maliki administration.

In a public statement after his firing, Kadhimi stood by his assessment of the Iraqi administration's plans, saying: “The Prime Minister himself has said that he is ready to give amnesty to the so-called resistance, provided they have not been involved in killing Iraqis.” Maliki's office was quick to distance itself from Kadhimi and to stress that any amnesty would only be considered for terrorists who had not killed US troops or Iraqi soldiers or civilians. Maliki went on to make a televised speech on Thursday where the issue of negotiating with terrorists was raised again with an emphasis that only those who did not have “Iraqi blood on their hands” would be approached.

While talking to the Press on Wednesday, President Bush made a lot of use of the term 'reconcilliation' in the context of Iraq, which many of his opponents have interpreted as a subtle statement of support for this idea of offering an olive branch to selected terrorist groups. And it does seem likely that President Bush is aware of Prime Minister Maliki's intentions and that the US leadership in Iraq may also be involved in considering this course of action.

In reaction, many on the left have gone absolutely berserk over this possibility. People who a week ago were shouting for us to get out of Iraq and basically give the country to the terrorists are now demanding that we draw a line in the sand and refuse to give a single inch. People who were shouting about the Maliki administration being a US puppet government are now demanding that we stop them from acting on this idea and tell them how to deal with their internal problems. A whole gaggle of Democrat politicians held a press conference to express their outrage, led by Senate Minority Leader Harry Reid (D-NV) who said:

“It is shocking that the Iraqi prime minister is reportedly considering granting amnesty to insurgents who have killed U.S. troops. On the day we lost the 2,500th soldier in Iraq, the mere idea that this proposal may go forward is an insult to the brave men and women who have died in the name of Iraqi freedom. I call on President Bush to denounce this proposal immediately.”

What on earth could have caused this sudden change of so many Democrats from doves to hawks overnight? Could it be the possibility that if Maliki can persuade most of the more moderate terrorists to lay down their arms, Iraq might not turn into the disaster they've been saying it is and it might even start to get sorted out before the midterm elections?

When you look at it, are negotiations with some of the terrorist groups such a bad idea, and might this not be the right time to do it?

You always want to go into negotiations from a position of strength. With sources inside Iraq suggesting that with the death of Zarqawi the Al Qaeda forces there are in total disarray and their own internal memos indicating that they are feeling 'gloomy' about their prostpects, and with a massive cleanup of Baghdad underway with 75,000 Iraqi troops hunting down terrorist cells, it looks very much like the Iraqi government is in the kind of strong position where they can afford to offer the hand of peace to some of the more legitimate groups, like the Shiite militias and bring them into the political process. If that takes amnesty, then it ought to be on the table.

So why not negotiate? Why not further isolate the truly criminal terrorists in Iraq by extending some consideration to those whose terrorism is more the product of internal Iraqi politics than of some grand Jihad? Making a few deals would make it much easier to hunt down and eliminate the real bad guys - hell, the militias will probably help us do it.

What's more, if we've set Iraq up to be a sovereign nation, shoudn't it be the Iraqi leadership, who will have to deal with these people in the long run, who make the decision on how to treat them? It certainly shouldn't be Democrats on Capitol Hill who've been giving aid and comfort to these terrorists for years, just because the political winds are blowing against them now.

I guess I'm weird because I'd like to see the War in Iraq end quickly with the establishment of law, order and a successful democratic government for the Iraqis. If that means negotiating with some terrorists, why the hell shouldn't we? I'd be outraged if our government and the Iraqi leaders weren't considering it.